Sighișoara and train journey to the Romanian/ Hungarian border

My train to Budapest wasn't until 17.00, so I had a lot of time to kill in Sighișoara before then. I got up late, checked out at the latest possible time and put my big case, carrier bag and rucksack into their luggage room. Then I went for a walk down the hill into the new town. I found a small supermarket and bought snacks and drinks for later. I was overjoyed to discover a bag of caramel flavoured boiled sweets with what looked like delicious melt-in-the-mouth chewy toffee-like centre.

After a sit-down in a small park and some photos of the beautiful view of the top of the clock tower, I returned to the hostel and had a lovely leisurely lunch. I stayed in the restaurant after that, writing a long email about the day before and doing other stuff on the internet until it was time to get a taxi to the station. 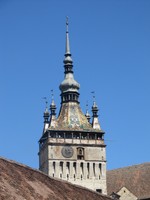 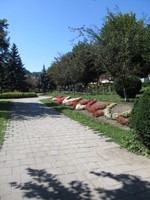 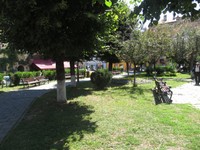 The train was a little bit shabby, but no worse than some I've seen in the UK. It was nearly empty. The train layouts have been very confusing to be honest, on every train trip so far - I don't think I've ended up in the right seat on any I've taken - and this was no different. Both carriage and seat numbers aren't always logically ordered. For example, on this occasion there were four long carriages on the train; I was supposed to be on carriage 409, seat 66, but both middle carriages were numbered 409 and claimed to have seats 22 - 80 or something similar.

I got on the nearest 409 carriage; there was a woman in seat 66 when I got there, so I showed her my ticket. She said 'Sprechen Sie Deutsch?' and I stood for a few seconds trying to remember what 'a little' is in German; Bulgarian and Spanish seemed to have pushed it out of my brain, however, so I ended up just saying it in English. She said 'English?' and I nodded, and she let out a short flood of German, which I managed to get the gist of (I'm quite proud of that actually, considering the many years it's been since I've had proper contact with the language). She was saying that she and her daughter had tickets for 65 and 66, but there was space opposite for me. She then showed me her ticket - it did say 66. I looked around and saw how empty the train was, so I just took a different seat across the aisle and at the front of the carriage.There were loads of free seats, plus I figured that if the ticket inspector had a problem with it, he or she would sort everything out.

When he came round, it turned out I was in the wrong carriage - he pointed at a sign which had 408 written on it. It said 409 on the outside and 408 on the inside! I should have been in the next carriage along. The carriage was so empty, though, he said it was fine for me to stay where I was.

Until the sun went down, the Transylvanian countryside transfixed me for quite some time; field after field of a particular type of crop I didn't recognise, hills, rivers, level crossings. Villages of shacks, colourful houses with terracotta-tiled roofs and the occasional wandering horse and cow. Every village seemed to have a church, often white, with a distinctively shaped tiled tower and spire. Sometimes the railway track ran so closely to the side of the road, pedestrians could have reached out and touched the train. As sunset drew closer I noticed an increase in flocks of birds, especially crows. One field we passed had a carpet of crows busy pecking at whatever crop it held; I'd never seen a field with so many birds on it before.

Comments on this blog entry are now closed to non-Travellerspoint members. You can still leave a comment if you are a member of Travellerspoint.